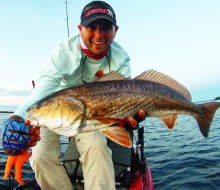 "Check out the latest dispatch from Kayak Fishing ClassicS to get the results of their National Championship Classic:

It was a beautiful, calm morning flooded with anticipation and excitement as the qualifying anglers prepared to launch their kayaks for the Kayak Fishing ClassicS National Championship Classic. Eric Henson, fishing from his Old Town Predator 13 won the series finale hands down but let’s back track a bit.

Henson is a kayak fishing guide out of Sarasota, Florida and owner of Casting Kayaks Guide Service. Yes, he worked very hard and made many sacrifices to put that outfit on the water. Winning a national championship of course helps his efforts but it’s the winning part that is really tough.S