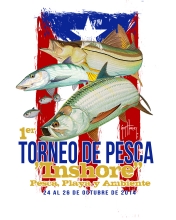 When Israel Umpierre began organizing the first-ever Torneo de Pesca Inshore (Inshore Fishing Tournament) — held by Pesca, Playa y Ambiente — he wanted to build upon earlier efforts made to help cleanup and protect the lagoons of San Juan, Puerto Rico. San Juan's city lagoons are home to big tarpon and snook, but the waters are affected by heavy amounts of trash, and also degraded via runoff and point-source pollution. Still, the waters are worth fighting for, and more than 60-plus anglers came out to catch tarpon (pictured), snook and other species in the name of education, conservation and enhancement. Not surprisingly, recreational fishermen are at the forefront in trying to revitalize San Juan's local estuaries.